How to access ExFat file systems on Ubuntu Linux

ExFat is a file system format for SD cards used in smartphones and digital cameras. In Linux 5.4, Microsoft plans to bring the drivers for this file system to the kernel. However, version 5.4 is a long way off, and if you’re on Ubuntu, you’ll be waiting for a while.

The reason support is taking so long to be implemented? It is because ExFat is not an open-source file system like a lot of the other file systems that users have access to in the Linux kernel. On some versions of the Linux kernel, ExFat works with a clever third-party hack, but it is not officially supported via drivers, as, Microsoft owns the technology and, until recently, hasn’t been willing to add the code to Linux in a way that complies with the kernel’s licensing terms.

Until Linux kernel 5.4 gets picked up by Canonical, official ExFat support will not be available out of the box on Ubuntu. So, for now, if you want to access SD cards on your Ubuntu PC using this file system, you must install the ExFat DKMS driver. Here’s how to set it up.

In this guide, we’ll be going over how to enable the ExFat driver on Ubuntu Linux, as the current kernel version that Ubuntu 18.04 LTS and 19.04 use do not support it. However, this driver is not limited to just Ubuntu users. If you are using Elementary OS Juno, Linux Mint 19, Peppermint OS, Zorin OS, or any other Linux operating system that uses Ubuntu as a base, the ExFat driver will work on your Linux distribution as well! Additionally, a similar driver for those on Debian Linux is downloadable via this GitHub page here.

The ExFat DKMS driver for Ubuntu is distributed to users via a PPA. PPAs are excellent, as users can get consistent updates, rather than having to download DEB packages manually every couple of months when there’s an update. To add the PPA on your Ubuntu, open up a terminal window by pressing Ctrl + Alt + T or Ctrl + Shift + T on the keyboard. Then, use the add-apt-repository command below to add the PPA. 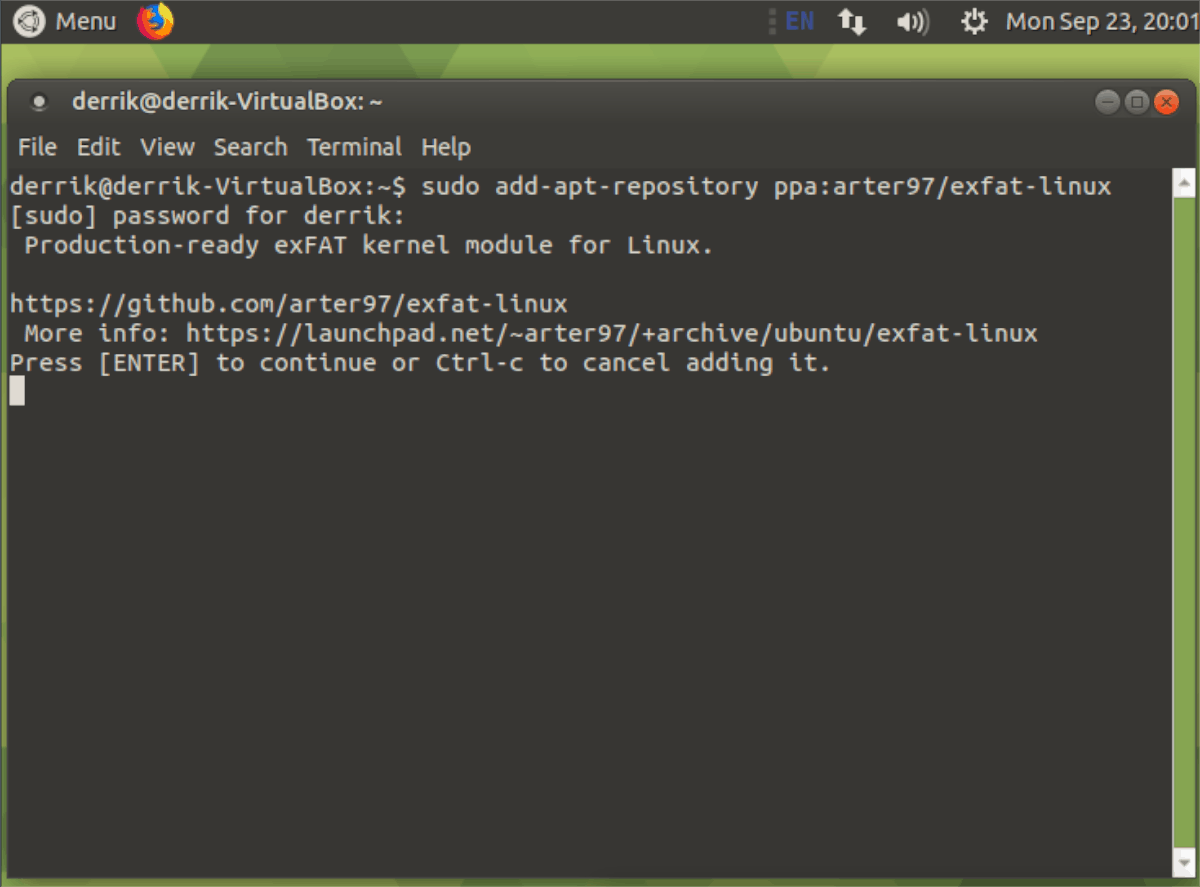 Once the PPA is set up on your Ubuntu Linux system, Ubuntu’s software sources must be updated before the ExFat drivercan be installed. To update, use the apt update command below.

Following running the apt update, you must install any pending software updates on your Ubuntu PC. To do this, use the apt upgrade command. Be sure to add in the “-y” command-line switch to bypass the “Y/N” prompt, and make the updating process go by much quicker. 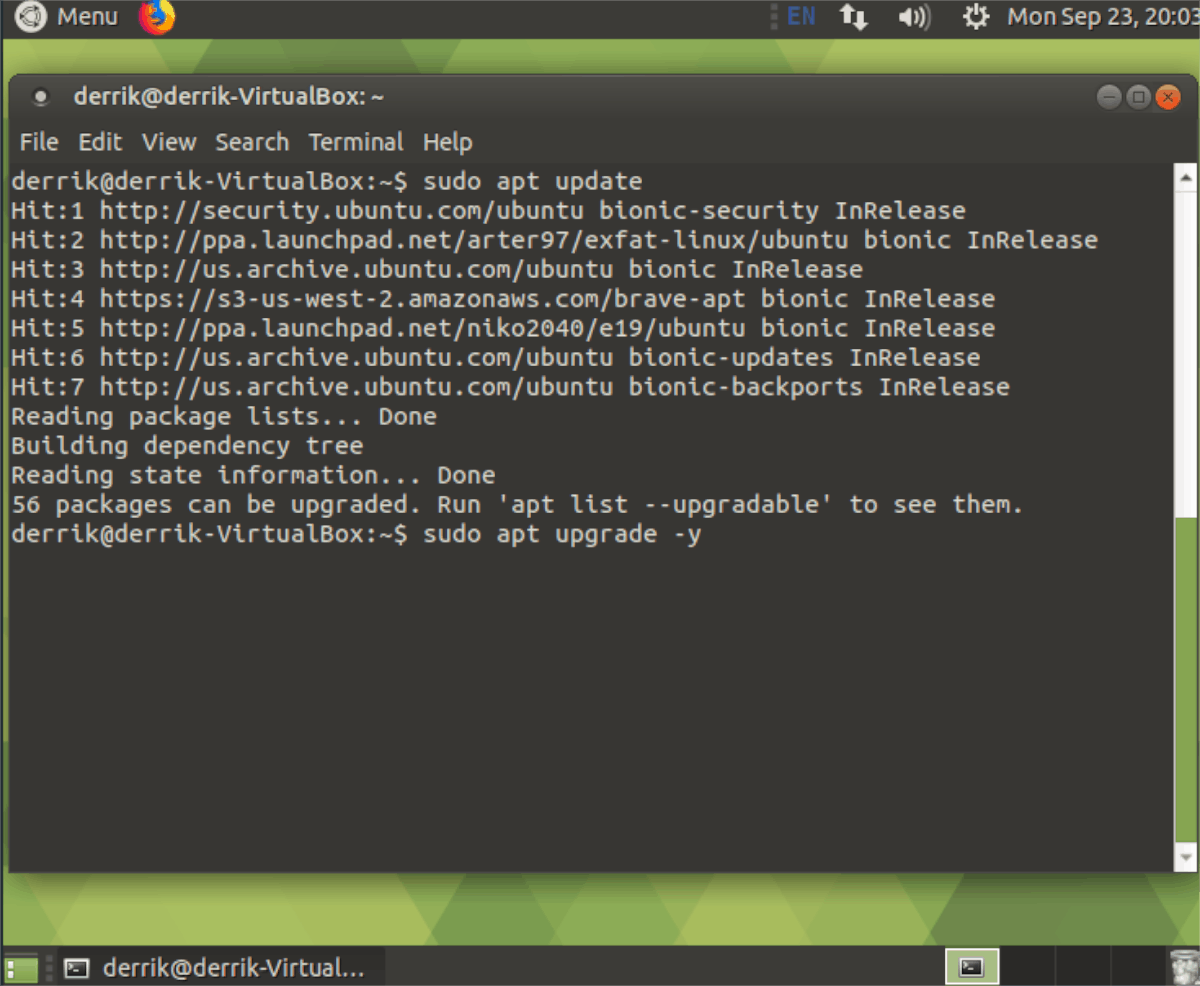 When all of the pending software updates are done installing on your Ubuntu Linux computer, the driver is ready to be installed using the apt install command to.

When the Ubuntu Linux package manager finishes installing the ExFat DKMS driver on the system, you won’t have DKMS filesystem support right away. Instead, you must reboot your Linux computer to begin using it.

The ExFat DKMS driver is very easy to remove and uninstall if you’ve decided you don’t want to use it anymore. To get rid of the driver from your system, start by uninstalling the package using the Apt package manager.

After running the uninstall command on the ExFat driver on Ubuntu Linux, the driver is removed from the kernel. However, the uninstallation process isn’t entirely done, as the software PPA added during the installation process is still present on the system. To remove the PPA, install the program PPA purge. It’s a simple tool that can quickly remove PPAs from Ubuntu Linux.

Following the installation of PPA purge, you can use the command-line to remove the ExFat DKMS Linux driver from your Ubuntu Linux PC with the command below.

With the PPA removed from your Ubuntu Linux PC via the PPA purge application, it’s time to refresh the system’s software sources, so that the old ExFat PPA is no longer present or accessible.

Once the update command runs its course, the ExFat Driver, and the PPA that was used to install the software on your Ubuntu Linux PC will be entirely removed from the computer. Now, all that’s left is to reboot the system to finalize the changes, as the ExFat Driver though uninstalled, is still running in the kernel till the next restart.

Upon logging back into your Linux PC, Ubuntu will no longer have ExFat support via the ExFat DKMS driver. 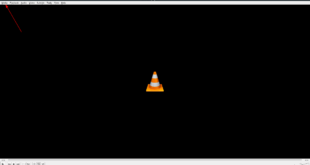 How to transcode video files in VLC on Linux 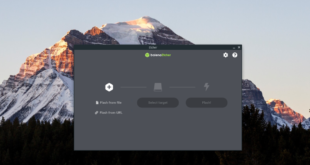 How to clone your Ubuntu server installation with Clonezilla 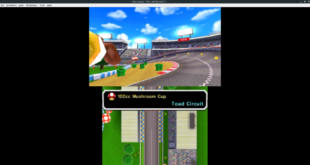 How to play Nintendo 3DS games on Linux 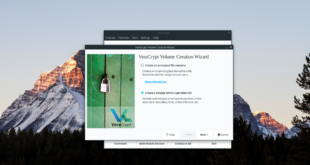 How to encrypt a USB flash drive on Linux with VeraCrypt

Do you have a USB flash drive that you would like to encrypt with VeraCrypt? …