How to update Corsair mouse firmware on Linux

Thanks to the CKB Next open-source application, it is now possible to update Corsair mouse firmware on Linux. In this guide, we will go over how to get going with CKB Next and update mouse firmware.

Using a Corsair keyboard? Here’s how you can update the firmware for it.

Updating the mouse firmware on Linux is not possible without installing the CKB Next software, as it contains driver support for several Corsair mice, as well as the built-in firmware updater we will be using to get your mouse up to date.

Installing CKB Next on Linux is a tedious process on some Linux operating systems. For this reason, we will demonstrate how to install the software before going over how to update your Corsair mouse.

Ubuntu Linux does not support CKB Next through its official software repositories. Instead, you must enable the official PPA.

Add the PPA, use the add-apt-repository command below.

Now that the CKB Next PPA is set up on your Linux PC, you will need to run the update command.

With the software up to date, use the apt install command to install CKB Next.

Debian SID has a CKB Next package that users can install. However, SID is not a stable OS, and most users are not using it. Instead, they’re using Buster, which doesn’t have the package. So instead, it must be compiled from source.

The first step in compiling CKB Next on Debian Linux is to install dependencies. In a terminal, use the command below to get everything working.

Now that you’ve installed all of the CKB Next dependencies grab the latest source code from the internet using git clone.

Once the code is done downloading, move the terminal into the “ckb-next” directory using the CD command.

To install the software, run the “quickinstall” script.

Enable the Daemon to use the software.

CKB Next is on the Arch Linux AUR, and this is the only way to install it. To set it up, start by installing both the “Git” and “Base-devel” packages.

Now that you’ve got the “Git” and “Base-devel” packages installed, use the git clone command to grab Trizen, an AUR helper app that will make setting up CKB Next much easier.

With Trizen set up, use it to install CKB Next.

CKB Next for OpenSUSE Linux is on the OpenSUSE Build Service. If you’d like to use CKB Next, go here.

The source code for CKB Next is available for most Linux distributions via GitHub. To get it working on your Linux PC, click here.

To update the Corsair mouse firmware, start by launching CKB Next on your Linux PC. You can do this by opening your app menu, searching for “CKB Next,” and opening it. Alternatively, press Alt + F2 on the keyboard to open up the quick launcher, and write in the command below to launch the app. 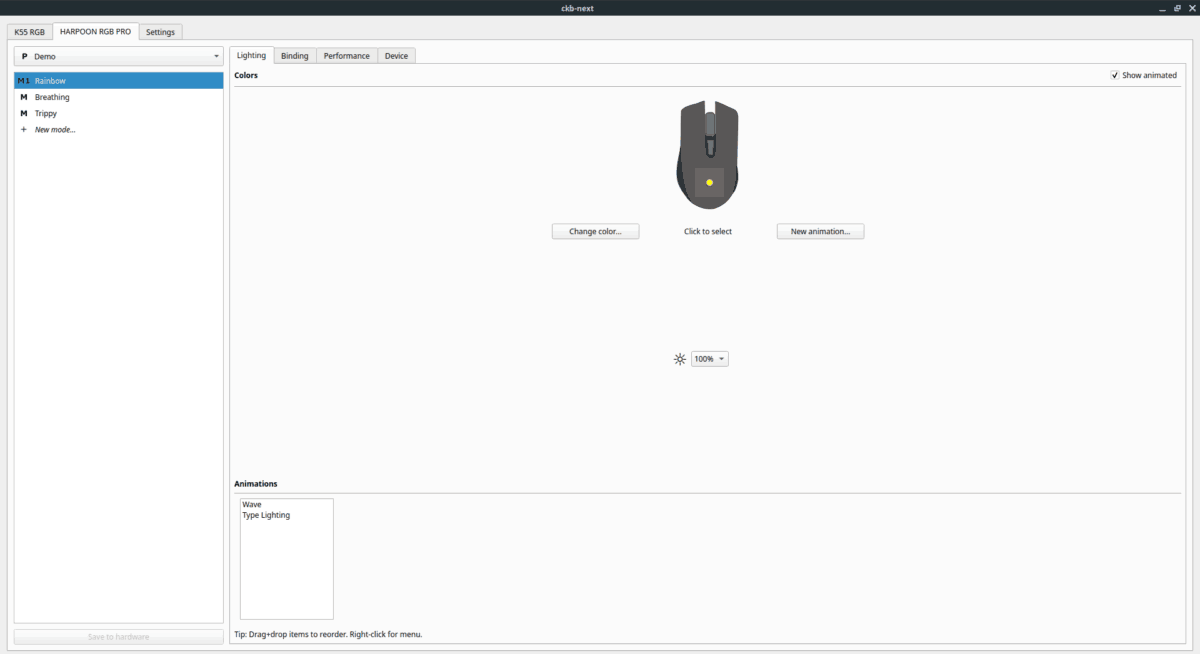 With the CKB Next application open and ready to go, follow the step-by-step instructions below to learn how to upgrade the firmware on your mouse.

Step 1: Inside of the CKB Next app, look for your mouse in the list. Please keep in mind that CKB Next will not label your device as “mouse”. Instead, it will show the device’s product name.

For example, to find the Corsair Harpoon RGB Pro mouse, locate the “HARPOON RGB PRO” tab, and click on it. You may need to click through a few tabs if you’re unaware of what your mouse’s name is.

Step 2: Inside of your mouse’s device tab in CKB Next there are several sections (which are also sorted by tabs.) These tabs are “Lighting,” “Binding,” “Performance,” and “Device.” Click on the “Device” tab to access the firmware area for your mouse.

Step 3: In the “Device” tab, you will see a lot of information about the state of your mouse. Find the “Status” section. 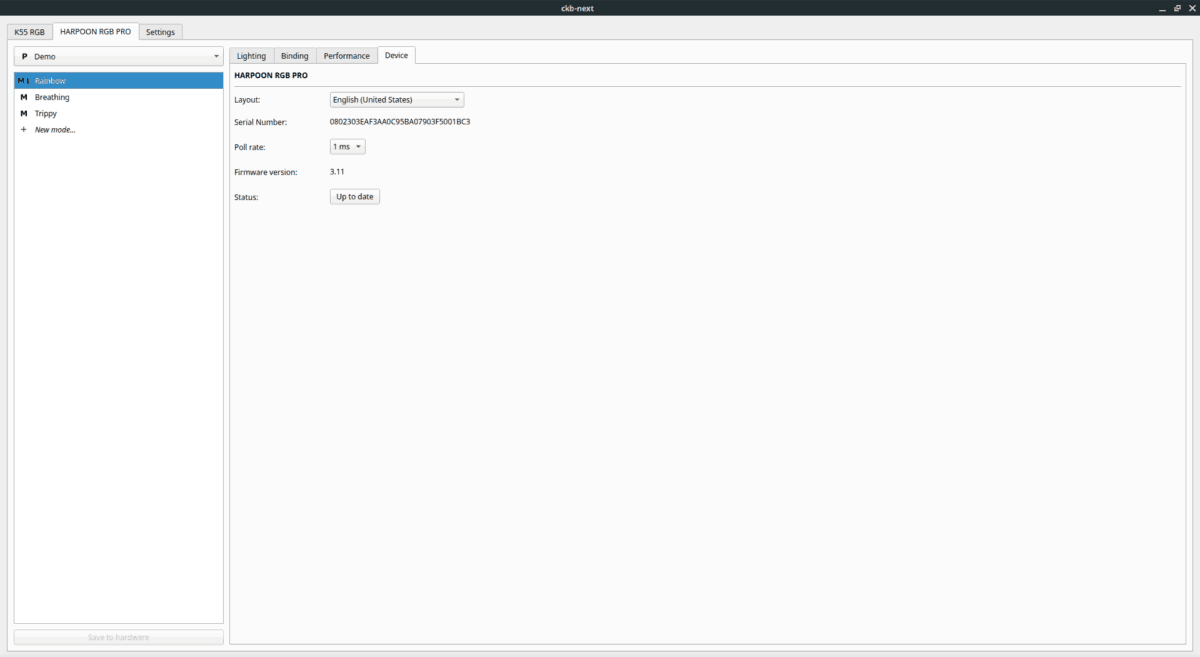 If the button next to “Status” says “Up to date,” there is no need to update the firmware on the mouse. If it does not, simply click it to download and apply the latest mouse firmware. 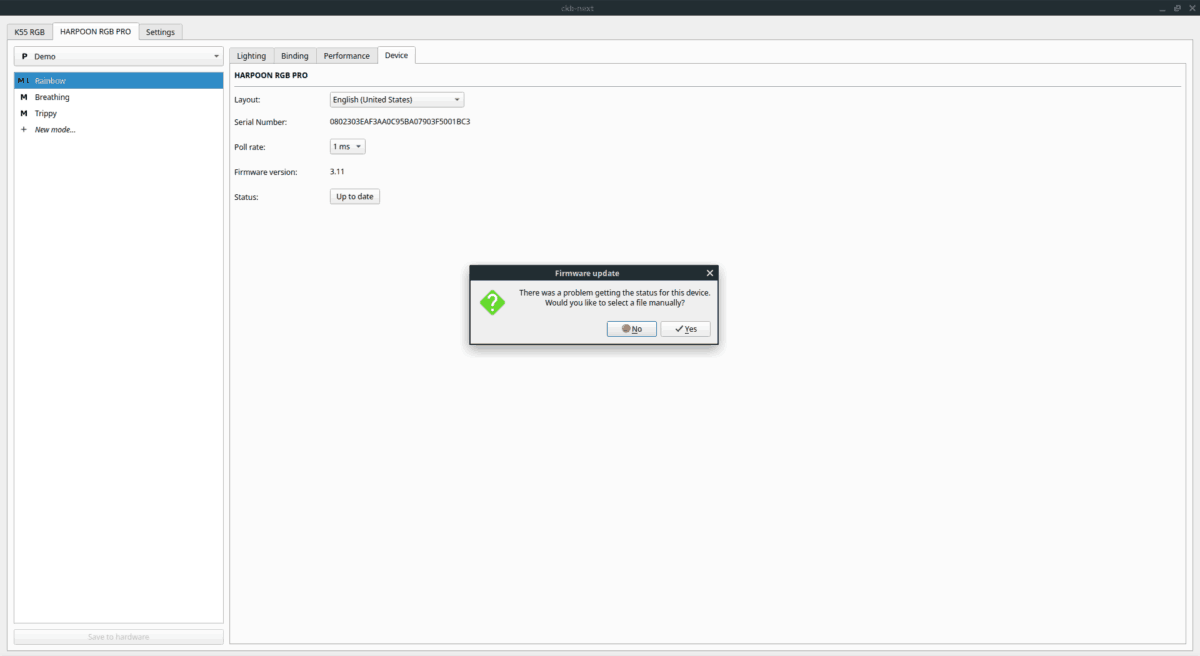 Alternatively, if your mouse is up to date but needs the firmware changed, click the “Up to date” button if you prefer to load up firmware manually. 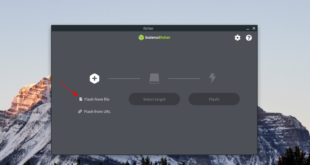 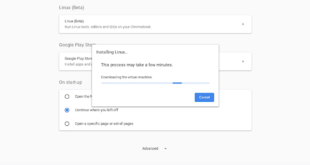 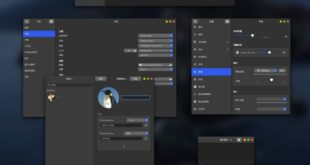 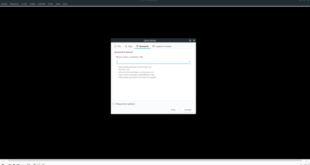