How to hide the mouse cursor in apps on Windows 10

The cursor is an essential UI element that must, normally, be visible at all times in order for you to interact with your system. There are some exceptions to this; media players and games. When you’re watching a video, whether it’s in your browser, in a dedicated media player, or a media app like Netflix, the cursor doesn’t need to be visible. Likewise, if you’re playing a game the cursor is again unnecessary. In both these cases, it is supposed to hide automatically but if it doesn’t, here are a few things you can try.

If you’re watching something and the cursor won’t disappear from the screen, try tapping the period key on your keyboard. In many cases, that will hide the cursor. If that doesn’t work, use the app’s keyboard shortcut to pause and play the video. The spacebar is normally assigned this function. Doing so may also hide the cursor.

Media players have a few tricks that can be used to hide the cursor but games do not. In games where the cursor is not meant to be visible, if it still shows, there isn’t much you can do. If you have media player acting the same way, you’re going to have to use the same solution that would work for a game; an app called AutoHideCursor.

It’s a free app available as a standard installable app and as a portable app. Download whichever one you want to use. Run the app and it will automatically hide the mouse cursor if it isn’t moved for 5 seconds. For games, you should enable the ‘Hide when a key is pressed’ option. This will allow you to hide the cursor by tapping any key on the keyboard. The hide action won’t be subject to a period of inactivity. Tapping another key will not unhide it. Only moving the cursor will. 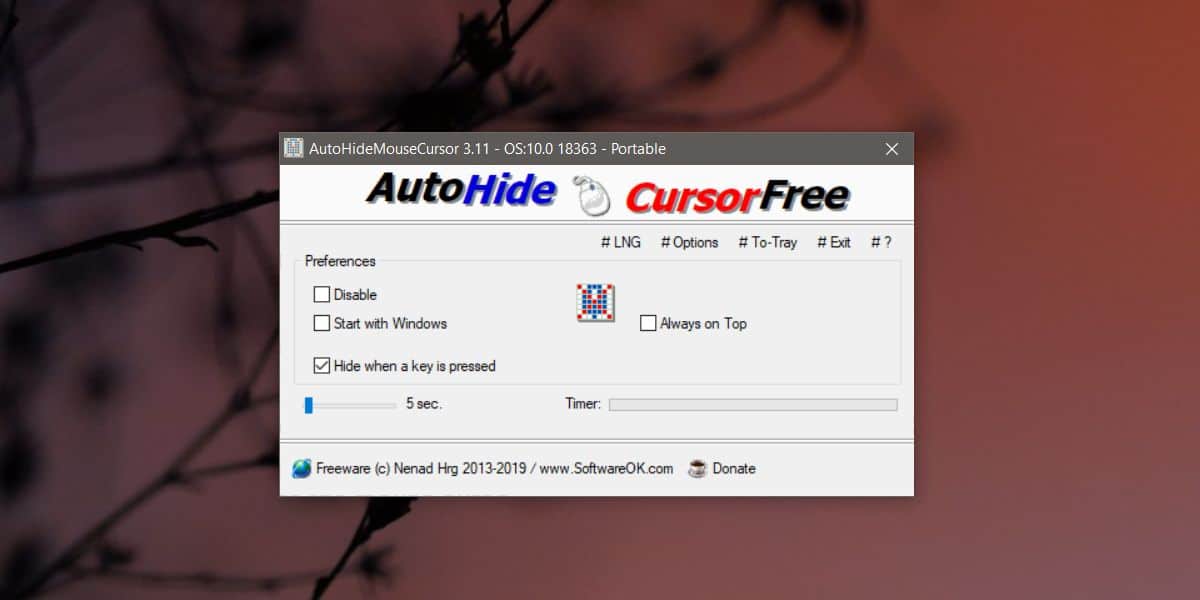 This is, of course, a hack way to hide the cursor in a game. If you’re still having trouble hiding the cursor in a particular game, it is possible that another app is running and preventing it from hiding. Take a look at which apps are active and quit as many as you can. If you’re using an app to record your screen, it might be responsible for keeping the cursor visible. If that’s the case, look for a recording tool that doesn’t force the cursor to remain visible or that has the option to hide/unhide it per the user’s requirement.