If you are sick of trying to open content in your browser only to get an error message telling you that Adobe Flash content is blocked, this is the guide for you. No matter which browser you are using on your Windows laptop or PC, we will show you how to unblock Adobe Flash content so you can start enjoying video and animated content again. 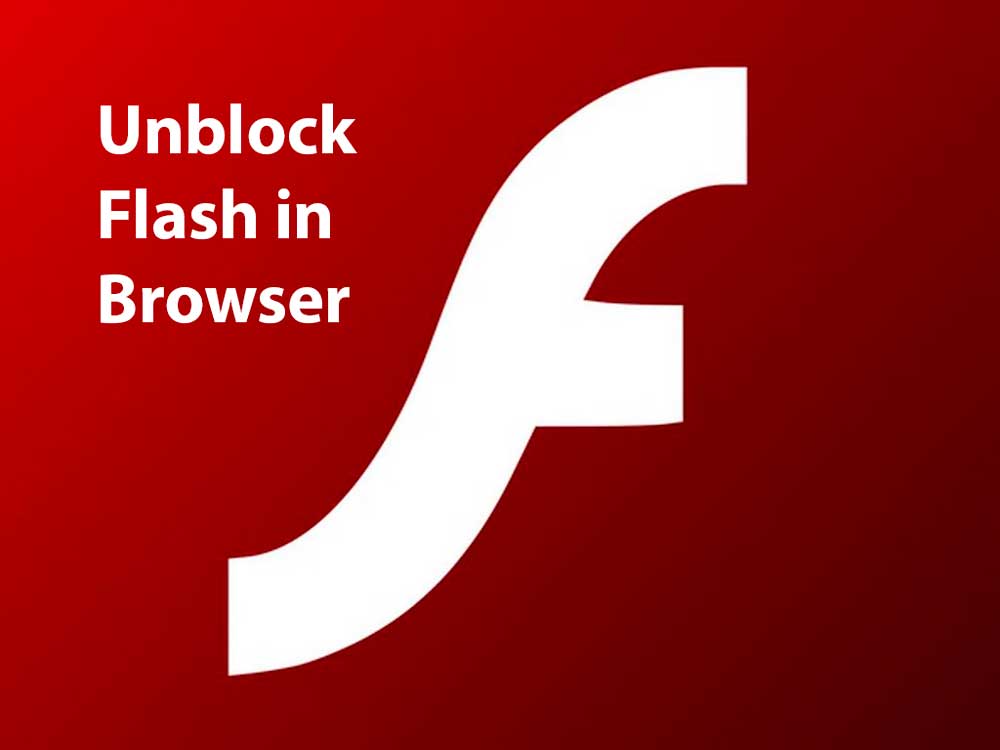 Adobe Flash used to be the go-to software for online video and animated content and much more besides. But in recent times it has come in for lots of criticism, primarily because of its perceived vulnerability to security issues.

It has been blocked by a lot of web browsers because of this with the likes of Mozilla, Google, and even Microsoft pulling support for Flash from its browsers in favor of HTML 5.

As a result of a gradual decline in usage, Adobe actually announced back in 2017 that at the end of 2020 it will stop supporting Adobe Flash and the software will be automatically removed from Windows devices through a Windows Update on 31st December.

But for now, Adobe Flash is still very much alive and it is commonly used on many websites. But with most major browsers not supporting Adobe Flash, this has resulted in the ‘Adobe Flash is blocked’ error being one of the most common online issues.

In this guide, we will explain how you can unblock Adobe Flash content in all of the main web browsers and still enjoy the significant amount of Flash-powered content that exists online.

How to unblock Adobe Flash in Google Chrome

Google Chrome is one of the most popular web browsers on Windows devices but has been at the forefront of efforts to bring reliance on Flash to an end.

If you want to unblock Flash content on Google Chrome, you can usually do so by following these simple steps.

In most cases, this should allow Flash content to run, but if the Allow button is not available you will have to configure Google Chrome’s Flash settings manually. This process is not complicated but there are a few different steps you need to follow:

Once you save this change, rather than automatically blocking access to Flash content, Google Chrome should instead ask you for permission to run this content. As long as you agree, you should now be able to enjoy any Flash content you like in Google Chrome.

If there are just a few websites that you use regularly that run Flash content and you want to keep other sites blocked, there is another option within the Flash settings menu on Google Chrome that you can take advantage of.

Underneath the toggle bar for blocking sites or asking permission is a section where you can specify specific websites you want to automatically allow to use Flash without giving permission.

To unblock Flash for a specific site open it in Chrome and:

How to unblock Adobe Flash in Microsoft Edge

Microsoft Edge is the default browser in Windows and is many users preferred choice. But like Google Chrome, it also automatically blocks access to Flash content.

When you visit a site that is using Flash, a dialog box will pop up informing you that Adobe Flash content has been blocked. It will then ask you ‘Do you want to allow Adobe Flash to run on this site?’.

There are two options for you to choose: 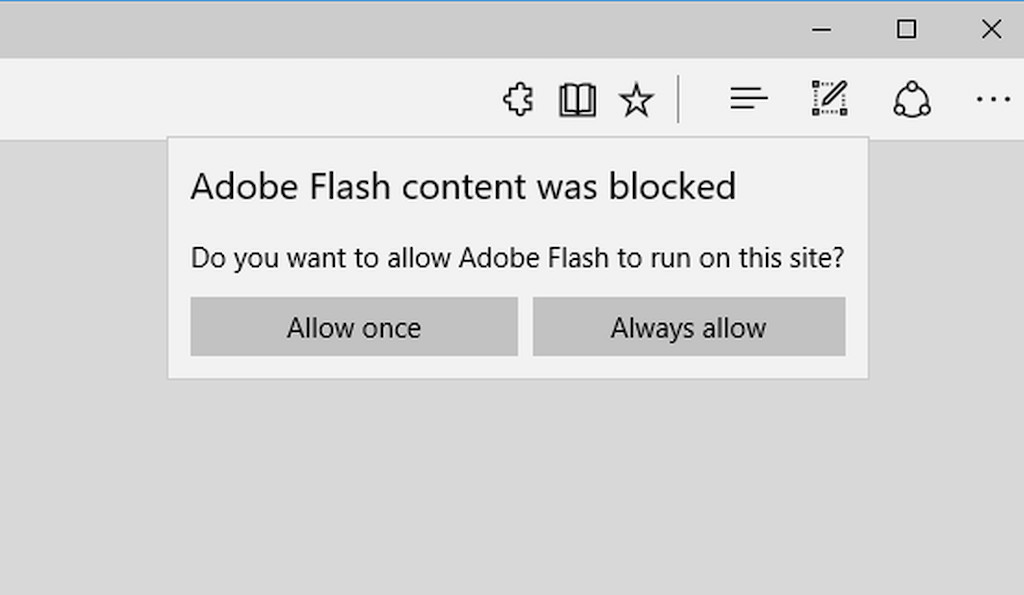 If this dialog box doesn’t open up automatically when you visit a site using Flash, you will need to switch Edge’s Adobe Flash Player setting on. This is quite easy to do. Just follow these simple steps:

Once you have made this change, Microsoft Edge should start to allow you to use Adobe Flash, although it will still pop up the dialog box to warn you when you are.

How to unblock Adobe Flash in Firefox

Mozilla changed its Firefox browsers configurations for Adobe Flash as far back as 2017. The default setting for all Firefox users is now Ask to Activate.

That means that Firefox will not automatically run Flash content but rather ask users for permission to do so first.

It does this by displaying an icon that informs you that the website you are visiting is running Adobe Flash and asking you to click Allow before it runs the relevant content.

Mozilla Firefox does also give users to option to automatically allow sites to run Adobe Flash content but you will have to switch this on manually. If you want to do this, you just need to follow these few simple steps: 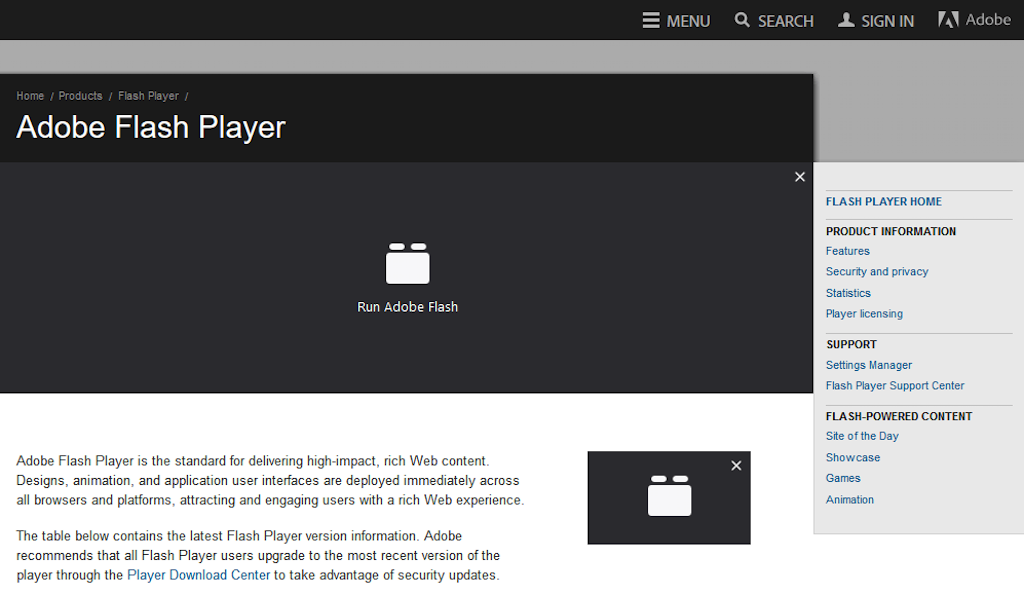 Once you save these changes, Mozilla Firefox should also allow all Flash content to run automatically.

While the Flash blocking error is probably the most common error that Windows users encounter, there are some other common issues that also arise.

Two common error messages that readers raise most frequently with us are:

Even though Adobe Flash is being phased out at the end of this year, a surprising number of websites are still using it. But all the most popular browsers now block Adobe Flash by default and that means that one of the most common errors people get when visiting websites is warning you that Adobe Flash is blocked.

It is a simple error and fortunately simple to fix too, no matter what web browser you use. In this guide, we have detailed the easiest way to fix the Flash is blocked error in the three most popular Windows web browsers; Google Chrome, Microsoft Edge, and Mozilla Firefox.

Our guide explains how to enable Flash to run on individual websites and also how to change the settings in your browser to automatically allow Flash content to run.