How to change Corsair keyboard backlight settings on Linux

Corsair keyboards are great for gaming on a PC, especially at night time, due to the excellent RGB backlight capabilities that they have. Users can easily change the Corsair keyboard backlight to display different colors and styles.

Through the Linux kernel, the Corsair line of gaming keyboards works pretty well. Media keys usually work, and the lighting patterns display correctly though, it’s not possible to configure and set the lighting on Linux through official software. Instead, users looking to customize the look and feel of the backlight need to install a custom tool called CKB-Next.

The CKB Next application is not installable via software sources on Linux. You won’t even find it available as an AppImage, Instead, installing this application requires building the program from scratch using a software compiler.

As mentioned earlier, CKB Next needs to be built from source to run. Installing software from source requires build-time dependencies. In this section, we’ll show you the various dependencies necessary to build the software successfully on various Linux OSes.

On Ubuntu 16.04 LTS, 18.04 LTS, and newer, there’s a handful of dependencies required to build CKB Next. To start the installation, enter the Apt command below.

The developers don’t specifically outline dependencies necessary for Debian Linux users. However, the web-page does list what to install on Ubuntu, and Debian Linux shares the same packages. To get these Ubuntu dependencies set up on your Debian Linux PC, enter the Apt-get command below.

Arch Linux has a few unofficial AUR packages available for those looking for an easy way to install CKB Next. However, the developer also lists dependencies on their GitHub so it can be compiled from source. In the terminal, enter the following Pacman command below to install the build-time dependencies needed to compile on Arch.

All versions of Fedora Linux can build CKB Next, so long as they install the various build-time dependencies required by using the Dnf command below into a terminal window.

No matter what version of OpenSUSE Linux you’re using, the CKB Next software can compile on it, provided the several build-time dependencies are installed. To get it working, run the following Zypper command below.

With the dependencies taken care of, use the Git command to clone the software directly from it’s GitHub repository.

Once the code is done downloading, move into the code folder using the CD command.

It is time to build the CKB Next software on Linux. Thankfully, compiling the software code will not require dozens of commands. Instead, just run the “quickinstall” script included with the code.

Once the CKB Next application is installed, you’ll need to reboot your Linux PC to finish the process. Upon login, your Linux PC will be using the Corsair CKB Next driver and will be able to configure the  Corsair keyboard backlight.

From here, locate the “Device” tab and click on it. Inside of the “Device” area, find “Status” and click the button next to it to update the firmware on it. 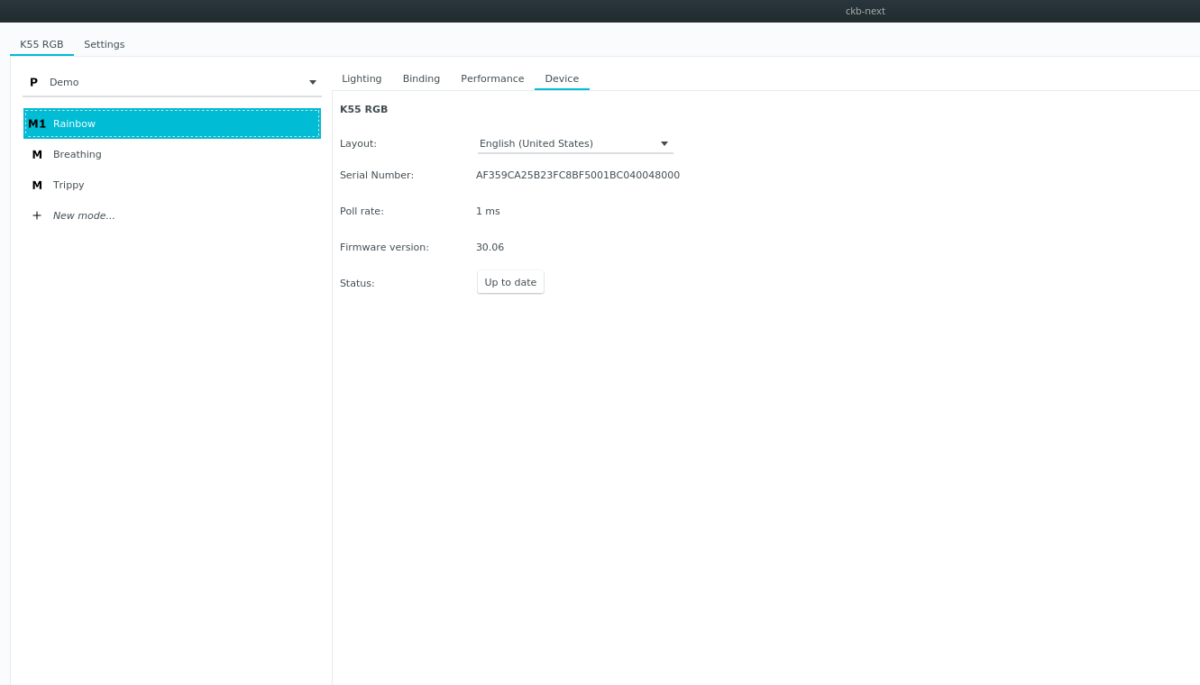 After updating your device’s firmware, find “Lighting” and click on it to access the keyboard backlight settings. Inside this area, look to the side-bar on the left to switch between some of the pre-programmed lighting settings.

To create a new lighting mode for your Corsair keyboard, follow the step-by-step instructions below.

Step 1: Find “New mode” and click it to create a new lighting mode.

Step 2: Write the name of the new mode on the keyboard to label it in CKB Next. 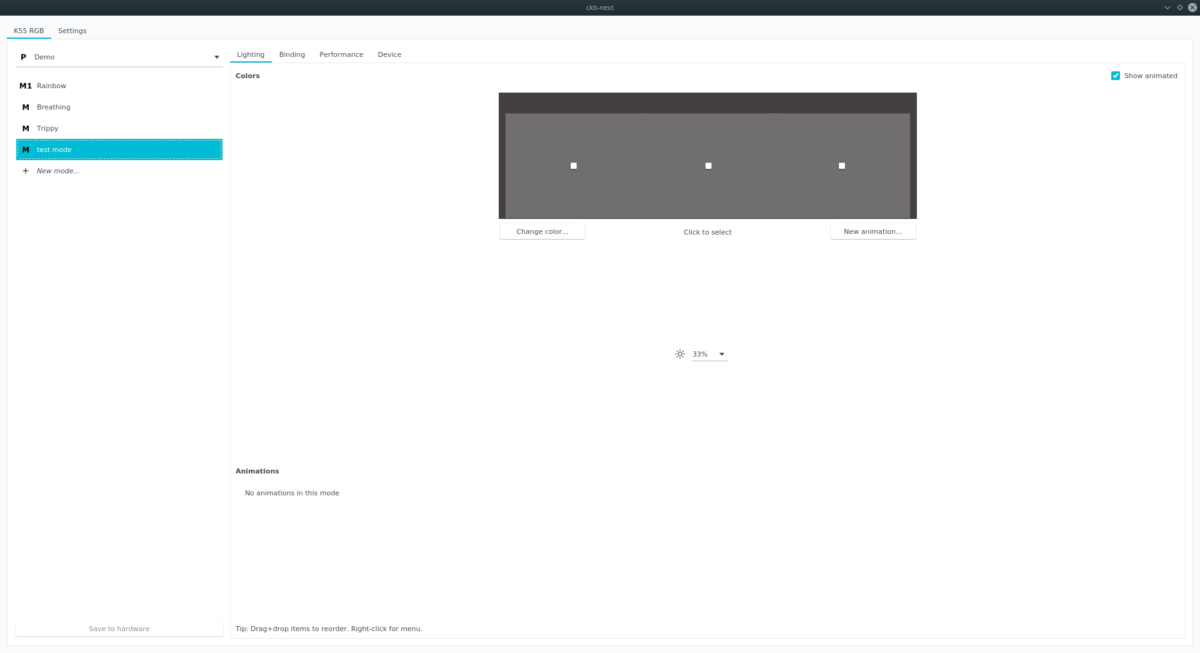 Step 3: Click on the furthest square from the left, and select the button with (255,255,255) to set the color for this square. Do the same for the other squares. 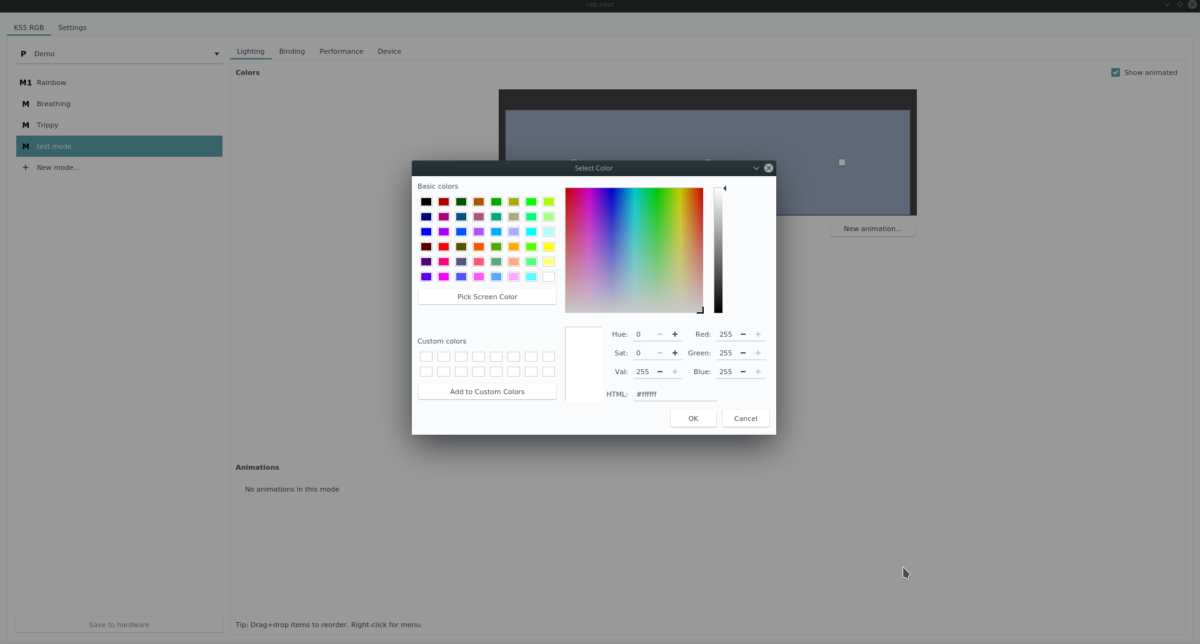 Step 4: Go back to the first square on the left, select it with the mouse and click “New animation.”

Use the animation configuration window to customize how you want the keyboard to animate this square. Be sure to do the same with the other two squares in the app.

Step 5: Select the new keyboard lighting mode you’ve just made on the sidebar, and click “Save to hardware” to apply it to your Corsair keyboard.

As soon as you install the new mode to your keyboard, it will start using it on Linux!