How to install Fedora apps offline

Are you running Fedora as your Linux distribution of choice? Do you have a spotty internet connection or slow downloads? If so, it’s a good idea to learn how to use the offline feature included in the DNF package manager.

DNF’s offline mode is known as “download only,” and when used, can make installing large amounts of programs much easier. Here’s how to use this feature on your Fedora system.

The DNF package management tool on Fedora Linux has a lot of useful functions, but “download” is one of the best things that it can do. By using this command-line argument while installing an RPM package from the Fedora software repositories, it’s very easy to download any app for using offline at a later date, on any Fedora Linux PC of your choosing.

To make use of this feature, open up a terminal window by pressing Ctrl + Alt + T or Ctrl + Shift + T on the keyboard. Then, once you’ve got a terminal window open, use the dnf search command below to search for the name of an app you’d like to install offline.

So, for example, if you’re looking to install the Chromium open-source browser offline, or on a Linux PC with slow internet, you’d enter the command-line arguments below. 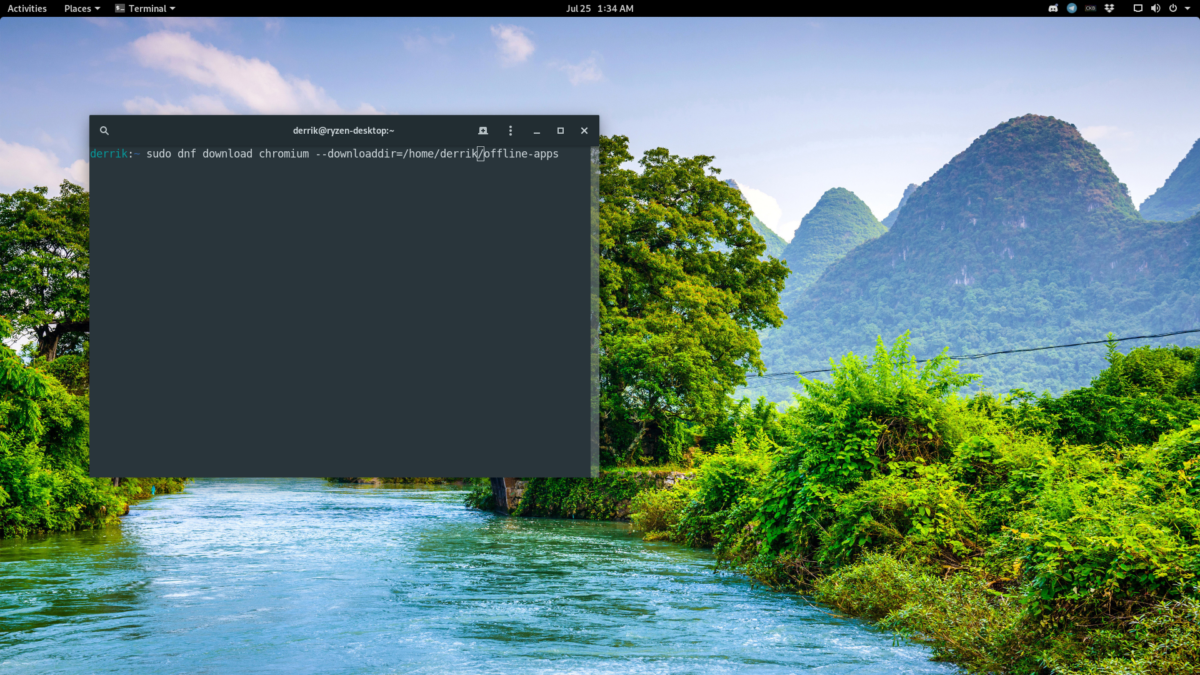 The above command will quickly grab the latest release of the Chromium open-source browser and place it in Fedora’s package cache directory, “/var/cache/dnf.”

From here, look through the various sub-directories and copy your files to a removable device to be installed offline on other computers.

It can be pretty annoying sorting through Fedora’s package cache directory. There are folders everywhere, and it makes taking your downloaded packages much harder than it should be. Luckily, there’s a way to force the DNF package manager to save offline apps to wherever the user specifies, using the “downloaddir” command-line switch.

So, for example, to download the Chromium web browser RPM package from the Fedora software repositories to a folder in your home directory labeled “offline-apps,” you’d enter the command below.

Note: please change "/home/username/offline-apps" in the command below with the username you use on your Linux PC. 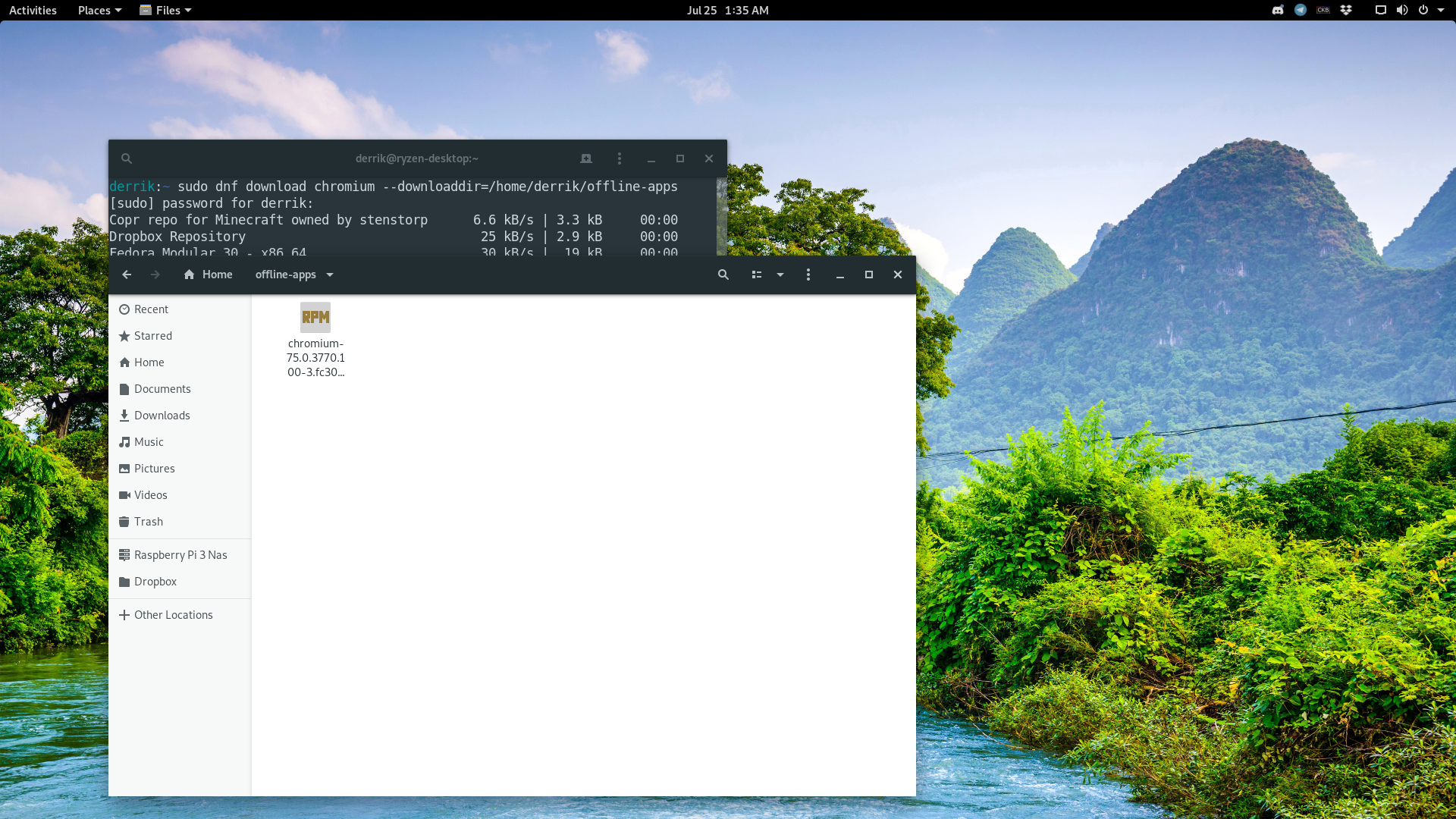 Once the downloading is complete, update the permissions of the “offline-apps” directory in the home folder, so that you can safely access the directory. Changing the permissions for this folder is required, as its permissions are set to root only.

With the permissions of the folder updated, copy the folder to a flash drive for installation on other Fedora Linux computers offline.

Using the download command examples above will download an RPM package from the Fedora Linux repository, and for the most part that works for computers that have limited internet access. However, if you also need to get the dependencies for an app, as there is no possible way to access the internet, you’ll need to use the “resolve” command-line switch.

With “resolve,” the Fedora DNF package manager will not only download the app itself but every single library, dependency and important piece of software required to run the app on your system.

To download Kodi for example, along with all of its software dependencies, run the command-line operation below.

The command above will download Kodi, along with all of its dependencies in the Fedora package cache directory (/var/cache/dnf), which you can access with:

Alternatively, download your app, along with all of its dependencies to the home directory (~) by entering the following command-line operation.

Note: be sure to replace "/home/username/offline-apps" section of the command below with the username you use on your Linux system. 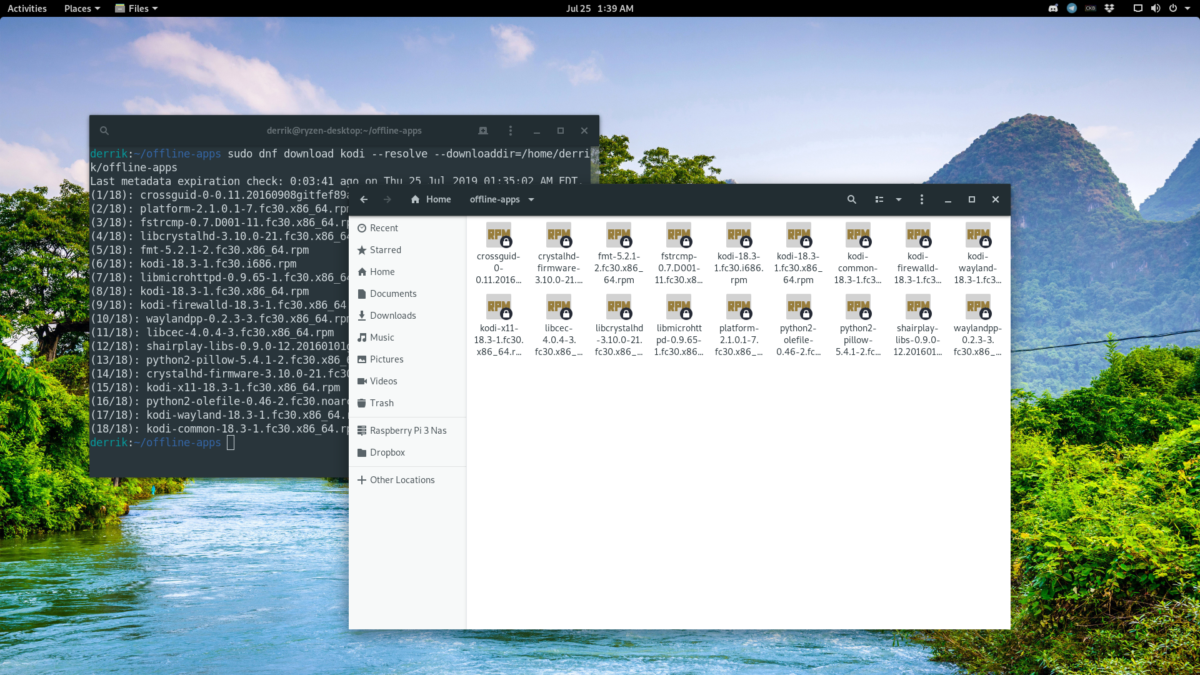 Update the permissions of the folder with the chmod command.

Then, feel free to copy “offline-apps” to a USB device for offline installation at a later time.

Other ways to install apps offline on Fedora

DNF’s download feature is a great way to ensure even offline instances of Fedora Linux can get the latest apps. However, if you’re looking for ways of getting apps on an offline Fedora system, this isn’t the only way. Introducing AppImage, it’s a technology that allows entire applications to be contained in a simple, downloadable file that is perfect for offline systems. If you’re interested in getting your hands on AppImage apps, head over to BinTray. It’s an excellent website that catalogs tons of apps in the AppImage format.