How to install the Eclipse Java IDE on Linux

Eclipse is the leading Java IDE for developers on Linux. It’s not hard to see why, as the app is filled with dozens of features, including support for Java, JSF, various XML editing tools, and even Git source control integrations.

The Eclipse tool is open source, and available for download on the developer’s website. Officially, Eclipse supports Ubuntu, Debian, Fedora, Arch Linux, OpenSUSE, and all other Linux distributions via a generic, TarGZ package. Here’s how to get it working on your system.

Arch Linux has the Eclipse Java IDE available to users in the “Community” software repository, for both the Java IDE and the Javascript IDE as well. To get the Java IDE working, start by opening up a terminal window. Opening a terminal window can be done by pressing Ctrl + Alt + T or Ctrl + Shift + T on the keyboard. Once the command-line terminal is ready to use, access the Pacman configuration file in the Nano text editor.

In the Pacman configuration file, press the Down arrow key and find “Community.” Next to “Community,” you’ll see a # symbol. Remove the symbol from directly in front of it. Be sure also to remove the # symbols from the lines directly below. Once everything is taken care of, save the edits by pressing Ctrl + O, and exit the editor with Ctrl + X.

With the “Community” software repository opened up, it’s time to install the Community packaged version of the Java IDE for Eclipse.

While the Arch Linux “Community” software repository has a relatively recent release of the Eclipse Java IDE, it’s not perfect for everyone. If you’d like to install the AUR release instead, follow the instructions below.

First, start by installing both the Git and the Base-devel packages. These two pieces of software are critical during the installation of the Eclipse Java IDE from the Arch AUR, as it allows for software to compile, as well as allowing for direct interaction with the AUR over Git. To install these packages, open up a terminal window and use the Pacman command below.

With the packages installed on Arch Linux, it’s time to download the latest AUR release of Eclipse from the internet. Using the git clone command below, start the downloading process.

The download will take a bit of time. When the process is done, use the CD command to move the terminal window into the “eclipse-devel” folder.

From here, you’ll be able to compile the software using the makepkg command. Though, keep in mind that when building the software on Arch that problems can happen. Be sure to check the comment section on the AUR for guidance!

The official way to install the Eclipse Java IDE, along with all of the other pieces of software developed by Eclipse is to use the standalone TarGZ installation tool. To get your hands on the installer, start by going to the official Eclipse website.

On the website, look for the “Download” button and select it. From there, find the “Download Packages” button to move to the available options for Eclipse on various platforms.

Once you’ve made it to the “packages” page, look for “Get Eclipse IDE 2019‑06,” and select the download button directly below it to start the download.

After the Linux package is done downloading, open up a terminal window by pressing Ctrl + Alt + T or Ctrl + Shift + T on the keyboard. From there, use the CD command to move the command-line session into the “Downloads” directory.

Inside of the “Downloads” folder, use the tar command to extract the Eclipse installation archive.

After everything is done extracting in the “Downloads” directory, you’ll see a folder with the label of “eclipse-installer.” Move the command-line session into this directory with the CD command below.

Inside of the “eclipse-installer” directory, run the GUI installer with the following terminal command.

Once the GUI installer opens up on the screen, you’ll see several different installation suggestions. Locate the “Eclipse IDE for Java Developers” option, and select it to move to the install page.

After the Eclipse installation tool is done, you’ll be able to instantly open up the Java IDE by selecting the green “LAUNCH” button. 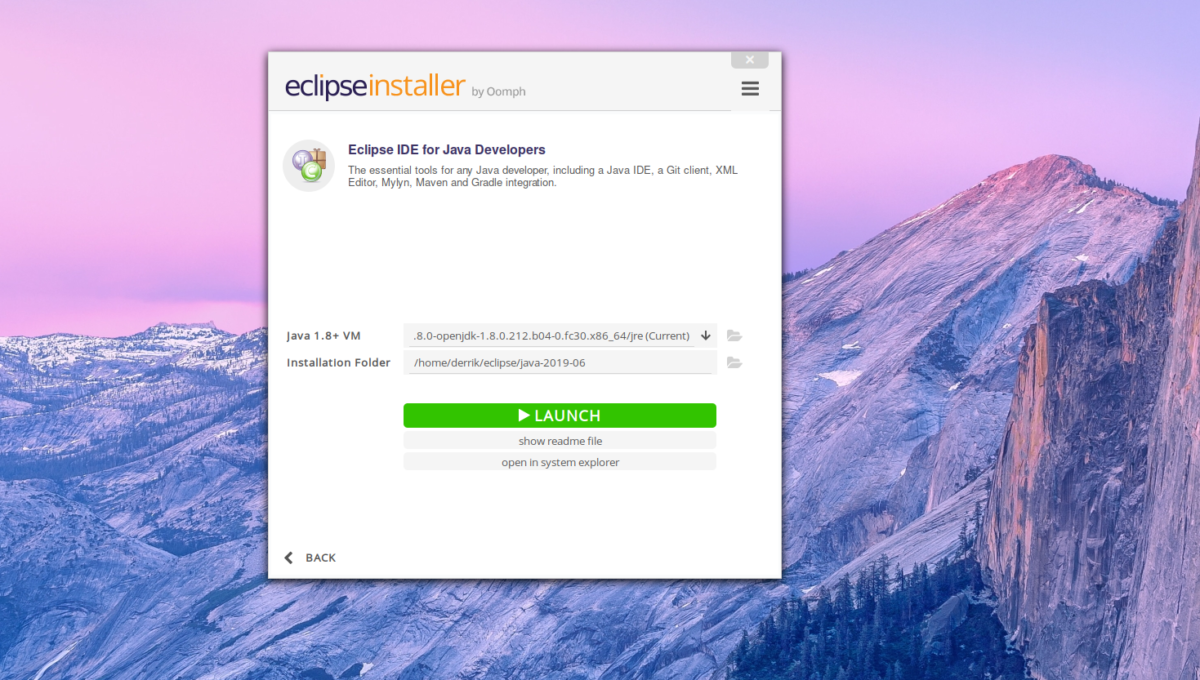