How to customize the KDE terminal

The terminal program that is included in the KDE Plasma 5 desktop environment (Konsole) is one of the most customizable and versatile apps of its kind in the Linux community. However, it suffers one huge drawback. New KDE users aren’t aware of all of the useful customization options that it has to offer!

In this article, we’ll dig deep into the KDE terminal and show you how you can fully customize it to make it your own. We’ll even go over how to install it for those that wish to use Konsole on a non-KDE desktop!

The Konsole terminal application is a part of the KDE desktop environment, so it’s easy to get going on nearly every Linux operating system out there. To start the installation, press Ctrl + Alt + T or Ctrl + Shift + T. Pressing this keyboard combination will open up your default terminal app. From there, you can follow the command-line instructions down below to set up Konsole on your system.

Using Ubuntu Linux? You can get the Konsole application installed on your Ubuntu PC with the Apt command.

On Debian, you’ll be able to set up the Konsole terminal emulator with the following Apt-get command.

The Konsole terminal emulator is available on Arch Linux via the “Extra” software repository. To install it, ensure that “Extra” is enabled in the Pacman configuration file. After that, install the app with the following Pacman command.

In Fedora Linux, the Konsole emulator is available in the primary software sources on both 32-bit and 64-bit. To install it on your system, use the Dnf command below.

OpenSUSE Linux users looking to get Konsole will be able to grab it directly from the OSS all software repository. To install it on your system, use the following Zypper command.

Looking to install the Konsole terminal emulator on your Linux PC yet aren’t using one of the Linux operating systems currently covered in this article? You’re in luck! Konsole is part of KDE — one of the most used desktop environments on all of Linux. As a result, you should be able to install Konsole on even the most obscure Linux  OSs.

To get Konsole working on lesser-known Linux distributions, search for “Konsole” and install it the way you typically install software on your system. Alternatively, check the official website for more information.

All of the tweaks and customizations in this article take place in the “Edit Profile” section of the Konsole application. You will need to open up this area before we go over any of the various customization options in this guide.

The default Konsole icon looks like any other Linux terminal icon. For most users, it is sufficient. However, if you’re not a fan of the default icon, you can easily customize and change it. Here’s how.

Inside of Konsole settings, locate the “General” section and click on it with the mouse. Once you’ve made it to “General” settings, click on the terminal icon next to “Profile 1”. 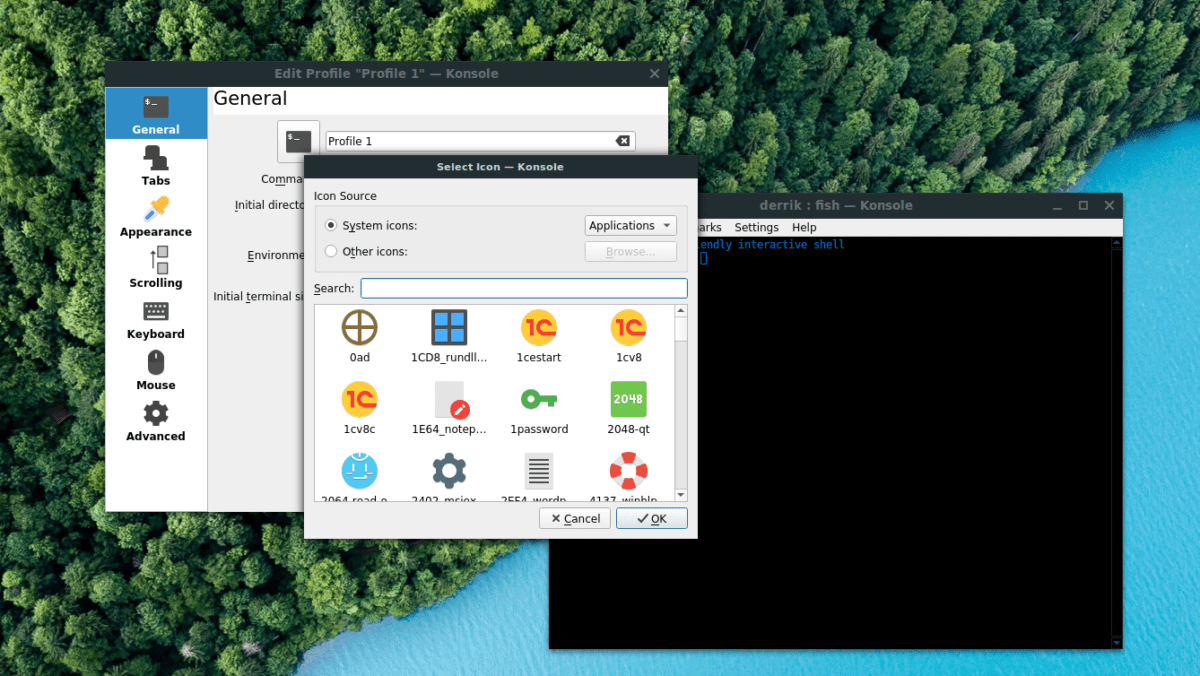 You may want to use a different shell than /bin/bash while running the Konsole terminal (like Csh, Zsh, Fish, etc.). Here’s how to change the default. 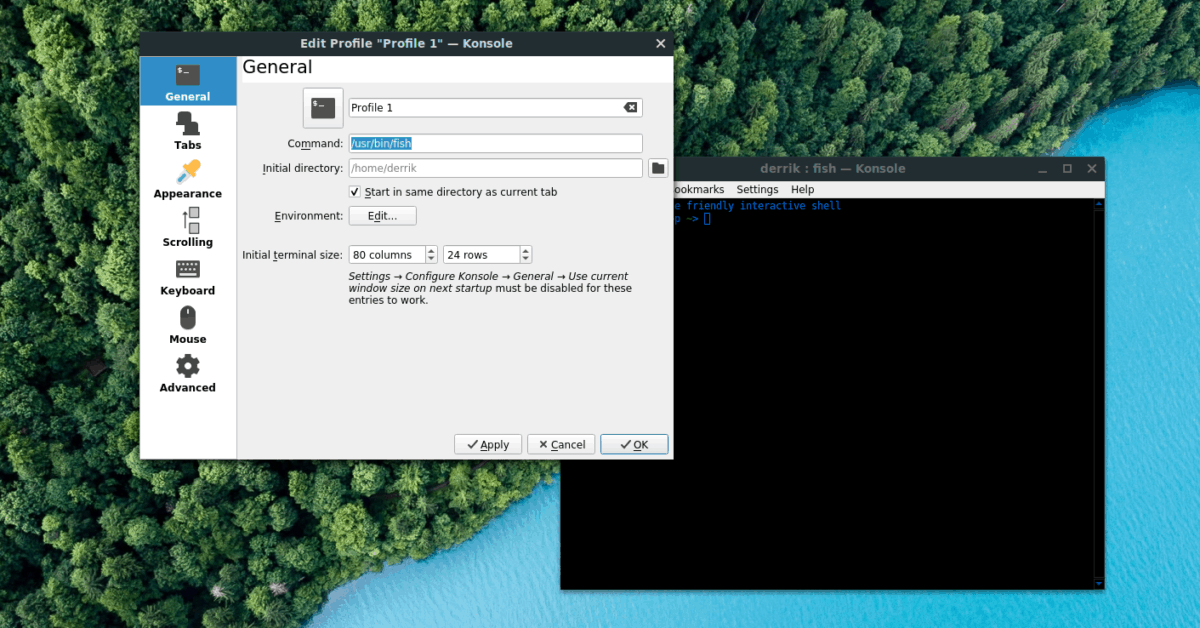 By default, the “Command” box says /bin/bash for the Bash terminal. Feel free to change it to an alternative shell by changing the command in the box.

Wish your Konsole terminal started up in a different directory rather than your user’s home folder? You can change it! Here’s how. 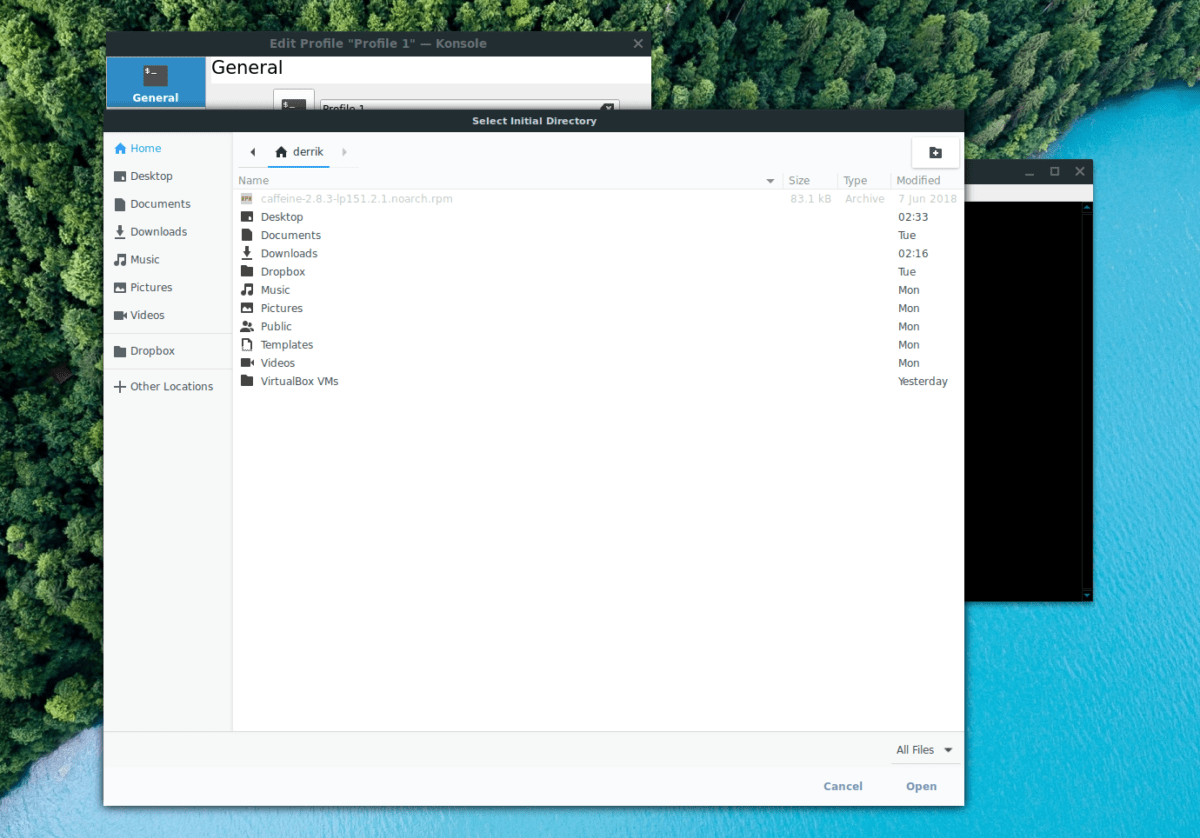 Go to the “General” settings, and find the “Initial directory” box. Then, click the folder button to browse for the directory you want Konsole to start in on launch.

Looking to change the color scheme of your Konsole terminal? If so, make your way to the “Appearance” area in the “Edit Profile” settings. From there, locate the “Color scheme & font” tab, and click on it. 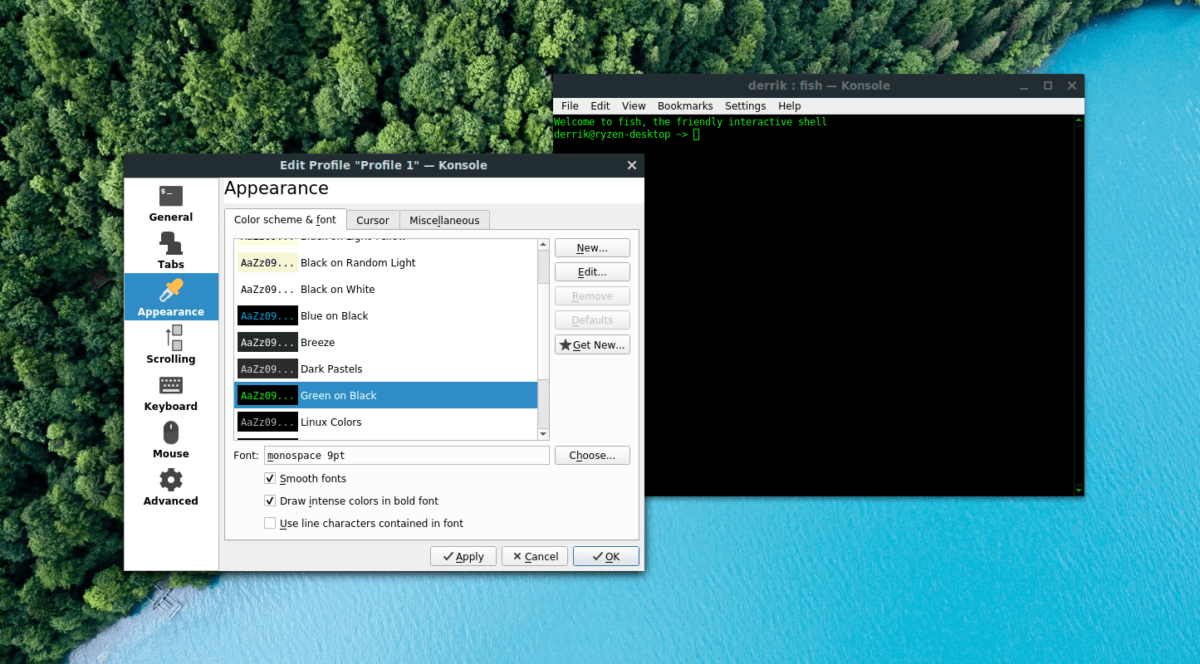 Find the color scheme that you’d like to use in console, and select it with the mouse to instantly switch to it.

The default font of the Konsole terminal emulator is “monospace 9pt”. That font is pretty small, especially on 4K screens with high DPI. Luckily, the font size can be changed!

To change the default font, open up the “Appearance” section of the Konsole terminal emulator. Then, click on the “Color scheme & font” tab. 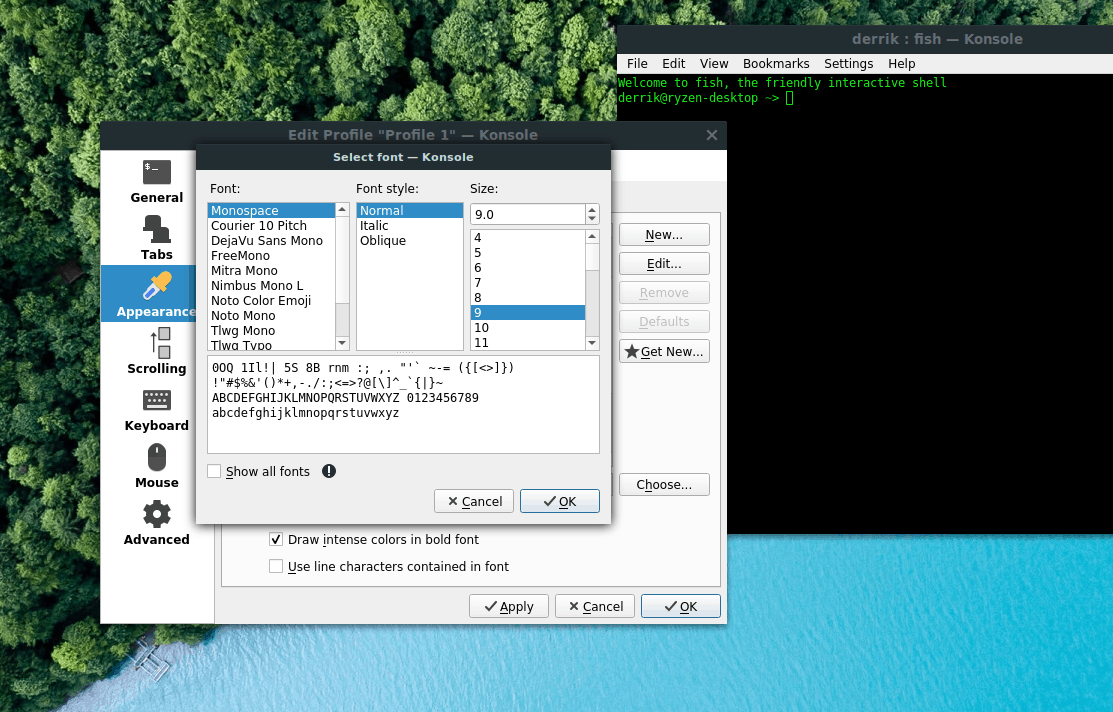 Inside of the “Color scheme & font” tab, locate the “Font” box and click on it to change Konsole’s font to suit your needs.

The scrollback in most modern terminals only goes back about 1,000 lines. So, if you have command history you’d like to look back at commands beyond the 1,000 line limit, you will not be able to see it. Konsole also uses this setting. 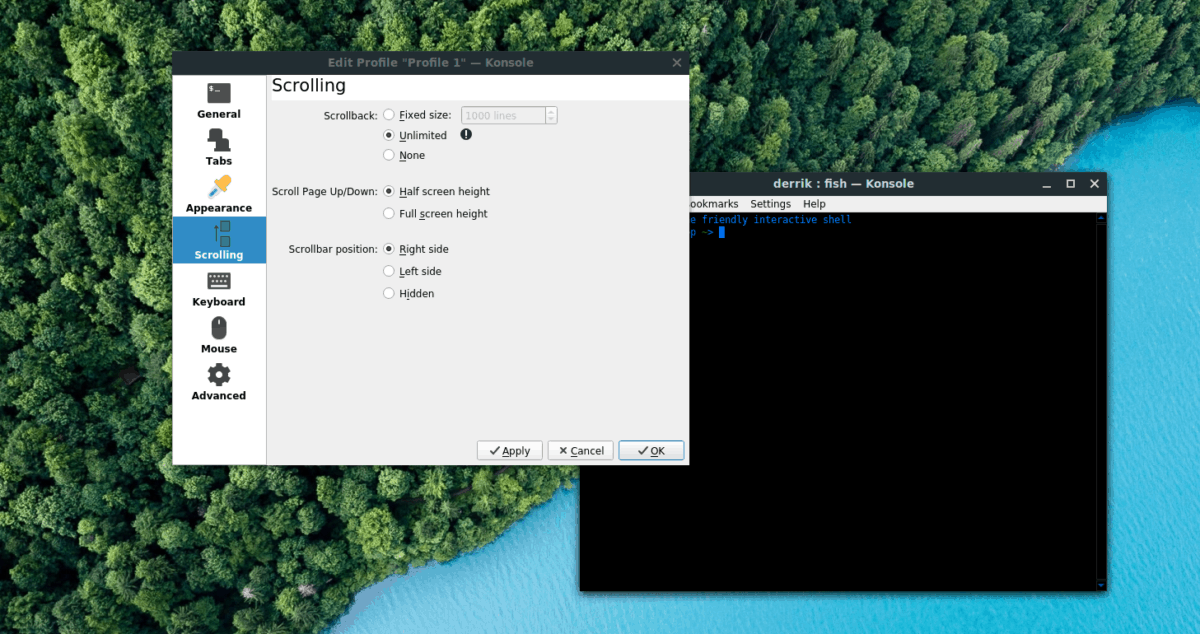 To get rid of console scrollback, or to make the limit longer than 1,000, access the “Scrolling” section of the “Edit Profile” settings window. Then, find “Scrollback” and change the limit from 1,000 to a higher number. Or, enable unlimited mode by clicking the “Unlimited” box.