How to take low quality screenshots on macOS

Screenshot tools, whether they’re native on an OS, or they’re third-party apps, will always favor high resolution, good quality images. In fact, many screenshot tools are popular for just how good a screenshot they can take. The only trade-off with a good quality screenshot is the file size. The better the image, the larger the file will be. The default screenshot utility on macOS captures screenshots in PNG and the result is large files. If you have a Retina display model, your screenshots will be much bigger than if you had a non-Retina display. If you’re looking to take low quality screenshots on macOS that aren’t too bad to look at but give you a smaller size file, you’re going to have to change the file format.

You can easily convert a PNG file to a JPEG file with Preview however, doing so for a large number of screenshots can be tedious. What you can do instead is change which format the screenshot utility on macOS uses.

JPEG is the best image format to use if you’re looking to take a screenshot that has good quality but isn’t very big. To change the format the screenshot utility uses, open Terminal and run the following command. 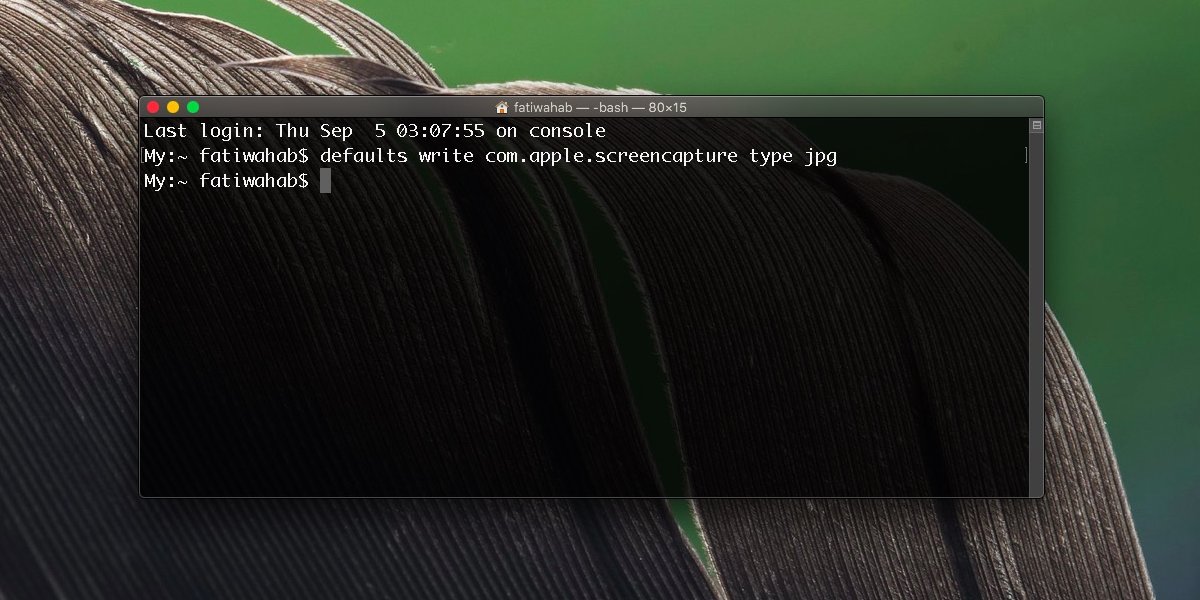 Once the command is run, any new screenshots you take will be saved in the JPG file format and the file will be significantly smaller than if it were a PNG file.

You will still take screenshots the same way you did before. Nothing else changes in that regard. Use the same keyboard shortcuts to capture a full screen, active window, or select area, and the resulting JPEG screenshot will be much smaller. In my case, a screenshot went from being over 1MB to being less than 500KB on average. The change in quality was minimal but the saved space was considerable.

If you ever want to change the screenshot file format back to PNG, you can do so by running the following command in Terminal.

Although the JPEG screenshots are smaller, and lower in quality than a PNG, you can reduce its size further with Preview’s export feature. It lets you select the JPEG compression quality. The default quality isn’t bad. If you need to email screenshots and you’re not working on anything UI related, this is the easiest way to take screenshots that are smaller in size.